Respawn Entertainment are releasing Apex Legends is receiving a massive patch April 16 that will bring a variety of changes to the game as we know it.

Apex Legends is releasing a large update on April 16 that will be balancing several of the Legends and weapons along with coming out with their first Battle Pass XP boost.

There has been a lot of discussion in the community about the issues with the game currently, such as slow mo servers, but those don’t appear to be covered with this update.

The 1.1.1 update features a variety of buffs and nerfs, as Respawn aim to find the perfect balance and ‘meta’. The team previously stated that they want a ‘hierarchy’ to exist with the weapons — so not every gun is created equal.

Two snipers, the G7 Scout and the Longbow DMR enjoy a healthy buff in the 1.1.1 update, with weapons’ sway reduced. Leg damage has been nerfed however, from 25% to 10%. The Longbow also gets a fire rate and mag capacity bump.

The Energy AR, Havoc, also gets more ‘beams’ in the clip, and the pretty useless ‘charge beam’ (with a select fire) gets some much needed improvements. The Spitfire was a little too much, so the base damage has been reduced to only 18, down from 20, and the rather OP Wingman will now only hold four rounds rather than six.

The Mozambique didn’t receive any love with the 1.1.1 update.

The community-named Thicc Bois are each receiving buffs with this patch. Caustic and Gibraltar are two of the weakest Legends in the game so this will be good news to those who main them.

Caustic’s Gas Damage is getting a buff and he has a new passive perk that will reduce his damage taken. Gibraltar receives a buff to his Gun Shield health and also gets the same passive perk that Caustic is receiving.

There’s also some extra incentive to grind the battle pass with the 1.1.1 update, as from April 16 to April 18, your first top five finish of each day will grant you an entire battle pass level. Respawn say there will be more events like this in future too.

RESPAWN ENTERTAINMENT
Gibraltar is getting a much needed buff.

Apex Legends players have been discovering a number of annoying (and some just downright funny) glitches in the game since the Season 1 update, but 1.1.1 only puts one of these right, where boost badges would display incorrect percentages.

The drop ship speed has also been increased by 50%, which Respawn say is to encourage players to drop later in the flight path.

Respawn announced on Reddit the update is set to release some time around 1pm EST / 10am PST. You can read the full patch notes below.

At the start of Season 1, we previously talked about how our beloved Thicc Bois (Pathfinder, Gibraltar and Caustic) were getting crushed due to their hitbox size compared to other Legends. We first wanted to try adjusting hitboxes to better fit the model. For Pathfinder, this change worked very well. (Note: separately, we are actively investigating and working on fixing unrelated hit registration issues sometimes affecting all characters). However, after looking at the data and player feedback, Gibraltar and Caustic only improved slightly with the hitbox adjustments.

We don’t believe that hit box and character kit tuning is sufficient to bring Gibraltar and Caustic in line with their smaller competitors. Starting with Patch 1.1.1, Gibraltar and Caustic will get a new perk added to their passive — Fortified**, which reduces damage taken by 10%.** Over the week or two following this change, we will be watching how they perform with this additional protection and aggressively tune it if they are still underpowered relative to their size. Our goal is to ensure both Legends are viable picks by the end of this process.

Additionally, we’re also making a few quality of life kit adjustments to ensure their marquee abilities are a more impactful part of their individual playstyles.

On the weapons side of the equation, we’ve made a number of changes to try to improve the power of long range gameplay. We’re reducing leg shot damage reductions on sniper category weapons, so you’re not punished for landing inaccurate shots at long distances. Given the semi-auto and low damage nature of our current sniper suite, coupled with the general speed and evasiveness of many Legend kits, it already takes several challenging shots to down someone at range. Because of this difficult sniper environment, we’re also reducing general sniper weapon sway and hitting the DMR with a few targeted buffs to make it more viable to engage Legends at range.

Separately from the sniper category, we are nerfing the Spitfire a bit, but our goal is to still keep it strong, as it’s a rarer spawning weapon. The Wingman is receiving a few magazine size nerfs, so that it doesn’t dominate the stock gun vs. stock gun battle early on due to its super high damage per bullet. Lastly, the Havoc is getting some general ammo and charge beam buffs to bring it in line as a viable energy ammo AR that competes with the R-301 and Flatine/Hemlok. The end goal is that the Havoc pressures a player’s ability to find Energy ammo, but is less dependent on finding attachments, whereas the R-301 and Flatline/Hemlok have less ammo pressure, but a higher reliance on finding more attachments to achieve power.

We’ll also be finding other moments during the season to add Battle Pass XP bonuses, so stay tuned! 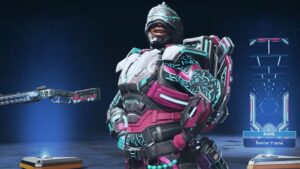